On the weekend of March 24, I went to Boston, MA to participate in LibrePlanet 2018.

This was my first time to LibrePlanet, and it happened to be the 10th anniversary of the event. It is gratis (free of charge) for students and Free Software Foundation (FSF) members, and I was also very fortunate to receive the travel scholarship to offset part of the expenses. After all, Boston is a big city with a lot of high rises, and staying near the venue at MIT campus is quite expensive. Back to the event, I do feel it is very welcoming to first comers. Those free software supporters who haven’t checked it out should definitely plan to do so next year.

When LibrePlanet 2018 was calling for proposals, I submitted two potential topics. One is an entry level introduction to LaTeX in a standard session, and the other is a lightning talk about my observation and thoughts on free software promotion in APAC. Surprisingly, the latter one got rejected, which possibly indicates that folks in the US do not find that topic very interesting. I presented my LaTeX talk, with more attendees than I had expected. I also got questions afterwards including what is the best way to set up TeX Live in a lab environment. Chances are more students will get started with LaTeX to create beautiful documents! If you missed the session then, check out the slides (source) and video recording online. I didn’t time the presentation very well and hope I can do better in the future.

There were a lot of interesting sessions throughout the weekend. Saturday’s keynote by Deb Nicholson was motivating and touching, and everyone applauded when she mentioned we should treat newcomers to the community with love, like how a mother treats adopted children.

Chris Lamb, the current Debian project leader and by the way very handsome, discussed motivation and progress on reproducible build. Gina Likins, a Red Hatter, and Matt Bernius, who collaborates with Mozilla, shared common myths about free software adoption in college. It’s sad that quite a few professors do not allow their students to use or contribute to free software projects mainly for the fear of plagiarism. It was mentioned that one good way to contradict such idea is inviting former students who have graduated and are working in the industry to share how the software industry works in reality.

There was of course RMS. He mentioned the progress of a decompiler which would be useful to develop free/libre firmware among other things. But the most memorable thing for me would be he popped up in a standard session, found some kids were standing in a occupied room, and then fetched chairs from a stack nearby for those kids. That was sweeeeeet! Besides, I also got to know the face of John Sullivan, young and handsome. I also met Georgia Young, a beautiful lady and the Program Manager of FSF.

There was FSF office open house on Friday evening, and I went there of course. Turns out it is located not at MIT campus, but near Downtown Crossing subway station. It was quite crowded when I got there, and people are forming random groups talking and having fun. I got to talk with a volunteer for LibrePlanet who is around the age of my grandparents and enjoys using free software (Kdenlive more specifically) for video production. I met Wez during the open house. The last time I met him I was still studying in Beijing, China. Similar for endle, who I managed to meet on Sunday at the venue. It’s always good to meet old friends again! At the open house I also found a Chinese lady who is working at FSF, Jasimin. My reimbursement is supposed to be taken care of by her 🙂

Other things I learned that are worth mentioning:

The second day of COSCUP 2015 was August 16, Sunday. Since we had FreedomKnight and zerng07 at the booth, and we did not find very intersting talks in the early morning, tonghuix and I gave ourselves a bit more rest and did not get up quite early. We both found the talks this year were not as attractive as last year. Part of the reason might be that this year’s theme “Open Culture” is kind of too general and it is not easy to talk about it. Or in a sense it is align with COSCUP’s philosoph “more social than tech”, which means it is more a chance of letting open source people to meet than diving into specific technical topics. 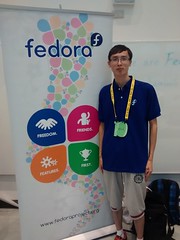 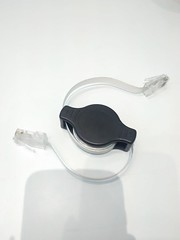 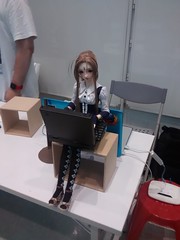 Around the booth we found some interesting swags that might be useful for future Fedora events. One is the retractable network cable as shown in the middle figure above. Such cables were distributed in COSCUP previously as gifts. I think it is quite nice because: 1) it is so useful that one can start to use it directly at the venue; 2) the central circular part is perfect for branding logo etc.; 3) it is not expensive and can be cheap with mass production. Another nice swag is shown in the rightmost figure above, a toy moe girl (optionally, with a toy laptop). As soon as she appeared on our neighboring booth, a crowd of people and cameras came around the booth. Westerners might not understand, but moe culture is quite popular among East Asia countries, and it is getting mainstream. For example, in Taiwan you can find quite a few moe girls on various posters in public. Besides, ".moe" has become a registrable top-level domain name. Since she is so eye-catching, I guess it is worth trying to make one for Fedora. Regarding design, the Fedora moe girl might be a good starting point.

At the booth I also discussed with FreedomKnight and zerng07 about Fedora community development. zerng07 is getting busier with his work, and they are trying to develop a new ambassador. It seems that currently the Taiwan contributors prefer to use the Facebook group of Fedora Chinese community for discussion. I encourage them to keep an eye on our mailing lists and attend weekly IRC meetings, where activities are more visible to the Chinese community and the whole Fedora community. I also encourage them to go outside for better communication and cooperation. When the local community grows strong enough, Taiwan can be a good candidate for FUDCon APAC. 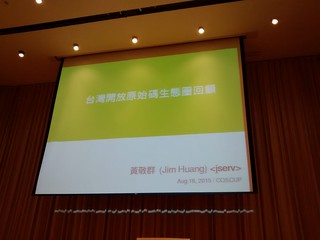 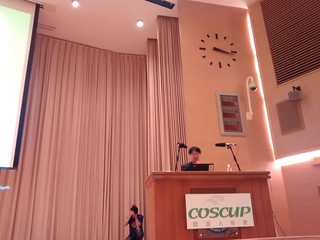 At around 15:00 PM, almost all attendees gathered into the large hall to listent to jserv‘s last speech “Retrospect on Taiwan Open Source Ecosystem”. jserv is a long term open source contributor in Taiwan, and he has contributed talks to COSCUP for all the ten years. In the morning I caught up with his experience sharing of open source in education. To encourage new contributors, he decided this talk to be his last speech in COSCUP. In the talk, he introduced the history of open source development in Taiwan and showed quite a few impressive early projects by Taiwan open source contributors. He also motivated the young generation in Taiwan to contribute more to open source in the world.

After that was the lightning talk session. In COSCUP, a lightning talk can be not a “talk” at all, because all kinds of performance are also welcome. I had learnt the rule for a while, but this time I finally had the chance to hear an ocarina show as a lightning talk by a COSCUP volunteer! Why ocarina show? Simply because others learnt that he can play ocarina during face-to-face discussion.

At last, after a short closing speech from the lead organizer came the group photo session. All volunteers were invited on stage. An unmanned aerial vehicle (UAV) was used for taking photos, which was really cool. By the way it was also cool when the UAV flew over your head! 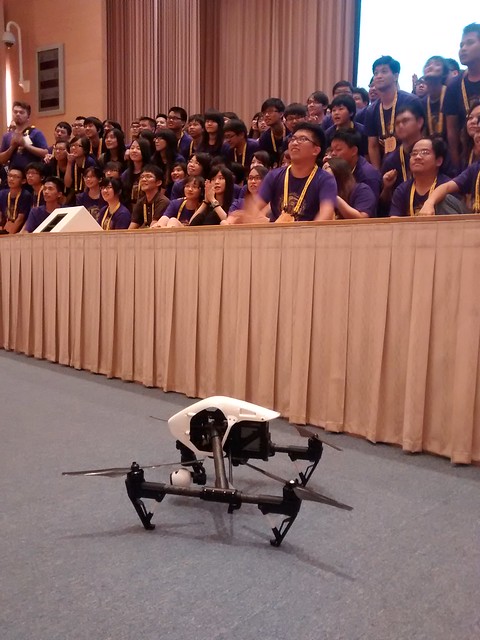 All in all, I enjoyed the two days of COSCUP very much. Looking into the future, I believe COSCUP can continue to be a great chance for Fedora Chinese community to gather up. Besides, non-Chinese contributors are also welcome to join to take the opportunity to meet face-to-face and get things done.

A few days ago I had the chance to attend COSCUP in Taiwan for the second time. This time I was lucky to get travel subsidy from Fedora APAC’s event budget. Below is my event report for day 1 (Aug 15, Saturday).

The venue of COSCUP 2015 is Academia Sinica, which is the same as in last year. But this time I stayed in a hotel not quite near the venue, sharing room with another Fedora ambassador tonghuix. So in the morning of day 1, we got up early and caught the Taipei MRT (Massive Rapid Transit) train. For the last mile to the venue, we took a taxi with FreedomKnight, a Fedora ambassador in Taiwan, and his girlfriend, who we happened to meet near our destination MRT station.

We arrived at the venue at about 8:30 AM, and it was about to allow registration. Quite a lot of attendees had already queued up before the gate. Shortly after that we registered by scanning the QR code. Then we looked for the booth location and set up the booth. FreedomKnight brought some Fedora 21 DVDs and I brought the badge reel which tonghuix carried from Beijing to Taipei. I tried a few ideas of placing these DVDs and settled down to a “4F” form. People started to visit our booth before we finished the preparation! 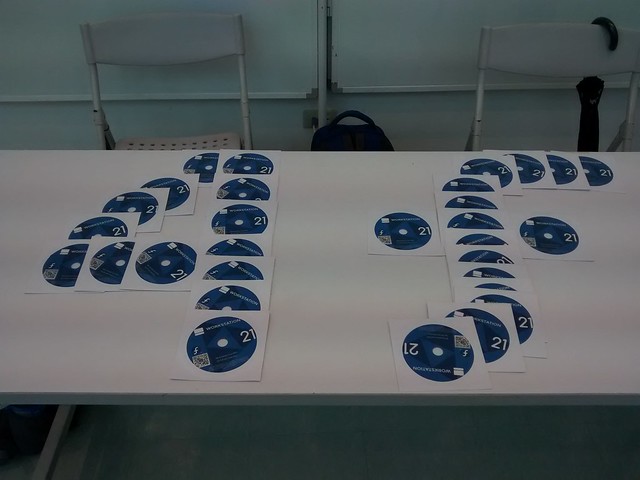 I spent the whole morning around our booth, talking with interested people about Fedora. Some of them were not familiar with Fedora, so I introduced to them that Fedora is an Linux distro similar as Ubuntu and openSUSE, but with special stress on our “Four Foundations” (aka 4F). Quite a few visitors had previous experience with Fedora, or current work experience with testing their company products on (somewhat old releases of) Fedora. I talked about Fedora.next with them and encouraged them to try out (or let their companies to try out) newer Fedora versions. Besides, we also met several guys who had used Fedora a lot but had not quite joined the local community, and I invited them to the Fedora BoF (Bird of a Feather) at night.

FreedomKnight’s girlfriend was also around our booth and helped out a lot. COSCUP continued to organize the “Dadi” game: every booth had a unique seal; anyone who had collected all booth seal stamps gained a chance in the lucky draw. There was a RPM packaging workshop which was proposed by the other Fedora ambassador in Taiwan, zerng07. Unfortunately zerng07 was not able to arrive on time due to work emergencies. FreedomKnight took the place and delivered the session.

In the afternoon, there were a workshop by tonghuix about how to use XMPP to chat, and I was asked to help with the demo. We demonstrated how to use free and open source XMPP clients both on Linux desktop and Android cellphone to chat, with and without OTR (off the record) encryption. I also took a few photos for the session. 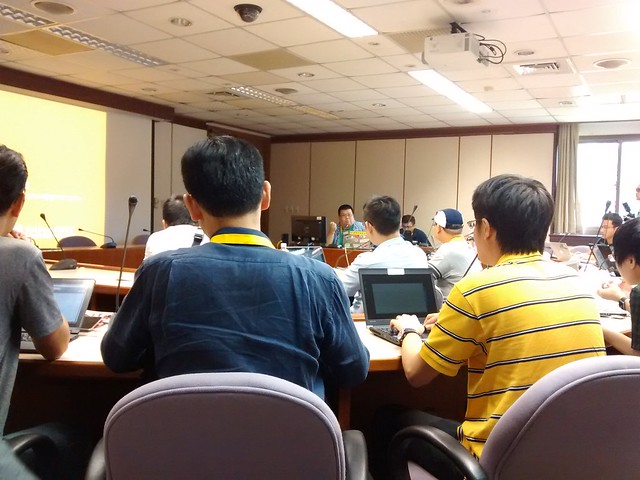 Then at around 16:00 PM, tonghuix gave an impressive lecture on free software community management. He took many little stories from the book Zhuang Zi as examples to illustrate how and why certain management practices succeed or fail. He summarized the Tao of free software community management as “Three-Self”, which can be roughly translated as “Freedom (aka Self-will or Self-choice), Self-governance, Self-organization”. 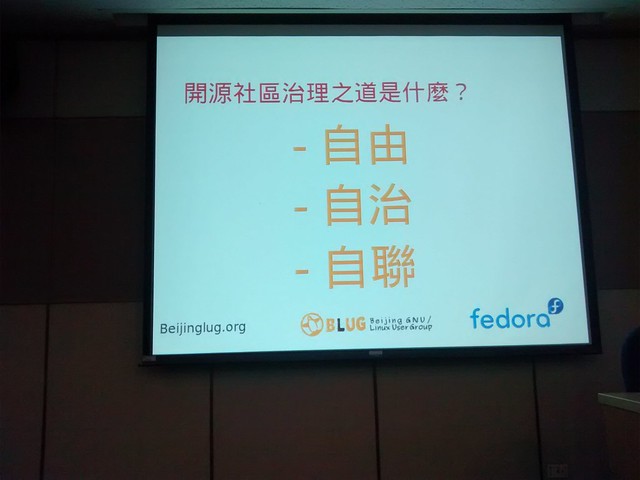 When the day’s session almost came to an end, zerng07 finally arrived. We had him and some other Fedora community members for the BoF session in the evening. The total number of people for Fedora BoF was about ten. During the BoF we discussed the interesting differences of languages and education between mainland China and Taiwan, as well as their impact on software localization and overall cooperation of Fedora Chinese community. The Chinese glossary might need to be revived. More interaction is needed to facilitate cooperation, and more awareness and support from the whole Fedora project are also required.