The hosts in the main hall on Sunday were Tobi from GNOME and Tommy He from Fedora. The sessions began with the keynote speech on Systemd by Lennart Poettering. He talked about what is the modern Linux system and what role Systemd plays in it. Pity I didn’t finish listening to the talk, since I was asked out to help with hacking room. It turns out quite a few guys would like a separate hacking room. So we decided to open up Room 2 for hacking. Shortly after setting it up, the most important guest, Richard Stallman (RMS), came to the venue along with Zeuux guys and others. They were not happy with the booth setup (it was the last booth) until an exchange was made. They brought many swags, and some of them are to be sold rather than given away. Richard also went into the hack room since it was still some time from his keynote. 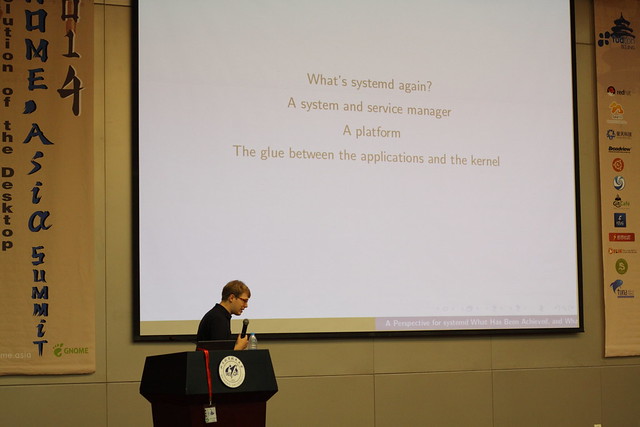 After Lennart’s talk there were four lightning talks. It’s such a pity that I missed them all, in particular biergaizi’s lightning talk on “Tips about Linux Servers”. Then RMS’s keynote on “Computing, Freedom and Privacy” began. Many more people were coming and filling up the main hall. RMS’s talk itself is not quite new to me since I had listened to him in Tsinghua. The part about why GNOME was created at all was new, but the history was already familiar to Linux hobbyists. However, being able to listen to his talk on site was quite impressive and educating. I have the feeling that his opinion might be ahead of the time but is always right. In the middle of the talk, he held an auction for a toy gnu and “an adorable book” (Free Software, Free Society). After the talk was the Q&A, which lasted till about 12:45. We went to Heyi Building for lunch after that. 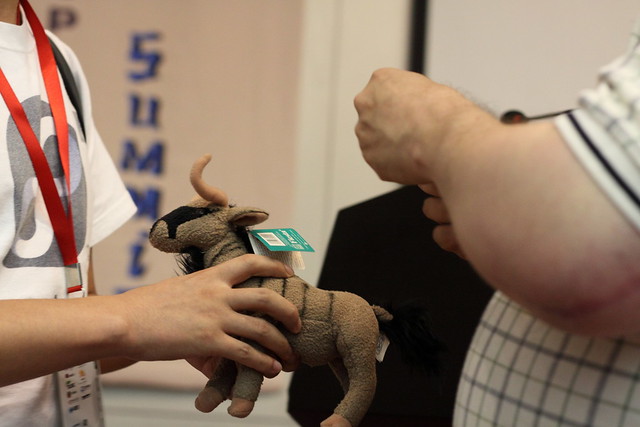 At lunch I got the message from zsun that Ankur would like to have the GPG key signing party in a small room rather than main hall. That was doable and we had difficulties to find a substitute to fill in the empty slot in main hall. At last the signing party was held in Room 2 and there was no replacement in main hall.

After lunch it was near 14:00, and the first talk in Room 3 was supposed to be mine. So I hurried there to prepare. The volunteers (Feng Tian, Justin Wong, Rosie Ye, Tang Zhixin, etc.) were ready. I began my talk on LaTeX Tips a little bit later than the schedule. I talked about common compilation errors and output errors and how to fix them. The time was limited so I skipped the part about math formulas and BibTeX errors. I got a question about the main advantages of LaTeX compared with GUI Office applications. I explained that the advantages lie in high quality output and automatic generation of table-of-contents and list-of-various-stuff. Users normally only focus on the main contents rather than formatting issues.

The second talk was “CD using Docker” by Gerard Braad. He explained the actual definition of CD, Consistent Development and Deployment, and use Docker to demonstrate the concept. He introduced PaaS, LXC, cgroups, Dokku and so on along the talk. The talk was presented in an interactive and interesting way: questions, answers, and gifts!

After that there were only 10 minutes for tea break. However it was a nice time to take photos in front of the large banner. The following talk was meant to be Carbo Kuo’s Batsh topic, but he could not come and had sent regrets on Saturday. So Cheer Xiao’s talk was moved upwards to fill in the slot. Cheer Xiao talked about his experiments with Elvish, a new Unix shell created by himself. There were many considerations and tradeoffs when designing a shell, and he introduced the philosophy behind his choices. He also compared it with existing shells such as fish and zsh.

There was no more talks in Room 3 afterwards, so we headed for Room 8 to join the discussion about Fedora Women.

The last talk in Room 8 was “Fedora Women” by Nitesh. He would like to make it more an interactive discussion than an oral presentation, and asked zsun and me to help translate. The session turned out to be quite productive. There were many nice suggestions out of the discussion. The main points are summarized as follows (with relevant names in parentheses):

We went back to the main hall for the closing part of the event, and found the last talk in the main hall had not been finished, and it also became a discussion. So it seems we should consider panel discussion as a session type in the future.

The closing speech was given by Kat (IIRC) and Jaroslav respectively, and then followed by the speech by the local team. Emily and I went on the stage. She spoke in English and I did the translation. We gave our thanks to everyone, especially hardworking volunteers. The two hand fans, full of writings in different languages, were given to Tong Hui and Zamir Sun respectively as gifts for best volunteer of each community. The top horizontal scroll for the couplet was decided to be “Happy Hacking” according to the result of two days’ voting. At last we had a group photo. 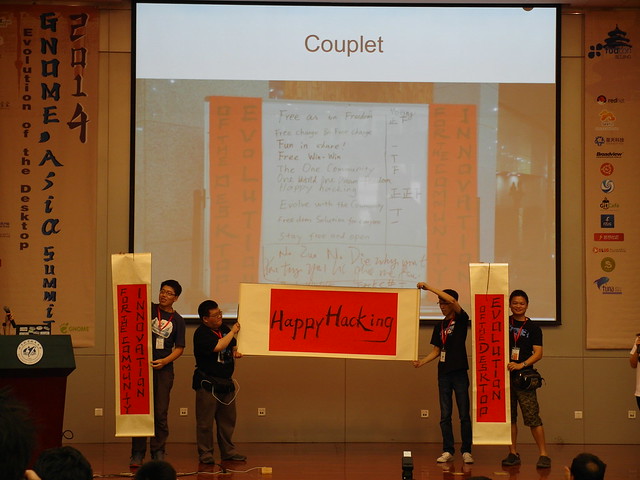 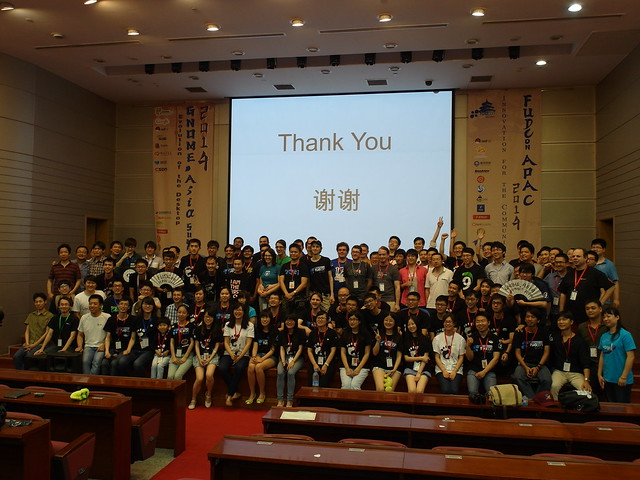 In the evening we had a very nice buffet dinner at Oasis Café, Vision Hotel, which is just behind the conference venue. We toasted to everyone and thanked them for coming. I sat with robyduck and zsun. We talked about a lot of things including robyduck’s travel plan. Robyduck also pointed out a possible issue with FZUG’s logo. Richard Stallman also went to the celebration party. Besides, zsun and I stood in front of the camera of Nitesh near the cafe since we promised to participate the short interview by him and Ankur. It was such a relax at the dinner after two days’ event and after several months’ preparation. And I was really happy that many people found the event good and successful.