Tonghui and I went up early, had a simple breakfast at the hotel, and then went to the venue. I took the Live DVDs along, and the box was kind of heavy (about 400 DVDs!). Many volunteers were already there and ready when we arrived. Christopher was there too and needed to find a hotel for the night. Robin Lee offered him help. I took out about 50 DVDs and put them at the Fedora booth, and told the volunteers at registration desks to distribute the remaining ones. I took out some and put them close to the desks while left others in the box. It turned out to be not so good since the ones in the box were left unnoticed by the volunteers and were not distributed. But they can be used in future events anyway. It rained at night, so we expect fewer attendees than usual. Later in the night I got the message there was above 200 registrants on Saturday, which is a pretty good number.

As for the swags (gifts) for attendees, we prepared sufficient conference bags and badges, and each bag had a Fedora flyer, a Fedora DVD, a Deepin DVD, and some flyers from various sponsors. It was good except several issues. The paper of Fedora flyer is soft (157g paper) and the bag is soft (basketball bag or so), which makes the flyer easily rumpled. Another issue is that the Deepin DVD was not together with Deepin brochure.

Although we had enough bags, there were not sufficient T-shirts. We had decided to provide each volunteer two T-shirts, one from GNOME and one from Fedora. Also we need to reserve T-shirts for designers, speakers and donate tickets buyers. Therefore not many T-shirts were left for normal attendees, so they had to be distributed in a first-come, first-served manner.

The sessions at main hall began with loud sound of a Chinese gong. The hosts are Max from GNOME and Gerard (gbraad) from Fedora. Kat and Jaroslav gave the welcome speech from each side respectively. Then Emily represented the local team and introduced the event and also called for voting for the top horizontal scroll for the couplet — Evolution of the Desktop, Innovation for the Community — which is the conference theme. The former of the two parts was proposed by GNOME folks. It took some time for me and other Fedora guys to think of the latter half. 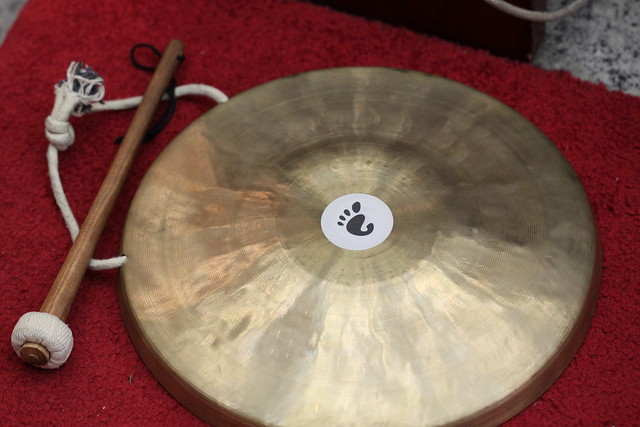 Then it was the time for keynote speeches. First Tobi gave a nice overview of GNOME 3.12 features. Then Jiri and Jaroslav introduced Fedora.next to the audience, talking about the features and the community. Pity I didn’t finish listening to their talk, since I needed to head to Room 8 to prepare following Fedora sessions. One of the most important thing was to bring a Fedora Friend Finder (power strip) there!

When I arrived at Room 8, the volunteers (Shi Jie, Ma jing, Fan Jiayue and others) were already there. Shi Jie was the host of Room 8 on Saturday. His introduction scripts were outdated and could not reflect real schedule that day, but he adjusted quickly with the help of kraks. Ma Jing was the coordinator in that room, and was in charge of distributing gifts (books and cups) to questioners. Fan Jiayue was responsible for posting news on SNS websites (weibo) and preparing the daily news report.

The first speech was “Fedora Videos” by Nitesh Narayan Lal. He talked about one main current work is to organize all the videos. It is worth pointing out Nitesh (together with Ankur) was also responsible for recoding short videos of interview with random attendees.

Then Robert Mayr from Italy gave us the talk “Fedora Websites – present and future”. The talk was quite interesting and the new design for Fedora.next was quite impressive. Currently there are no APAC contributors for Websites subproject. Hopefully we will have interested APAC folks join the team. Robert also showed the easyfix page and Tommy asked about the feasibility of localizing it.

The morning sessions ended after that, and then we went to lunch at Heyi Building in Beihang. I met Nitesh and Aditya there, and helped them to tell the cook they need vegan food. There was a short period when no one was taking care of the booth. Zamir helped and I asked dongfengweixiao to be there quickly.

At 14:00 the afternoon session started. First Aditya Patawari from India talked about “Orchestration with Ansible at Fedora Project.” He is from the infra team, and he talked about why they moved to Ansible, and how to use Ansible to executive ad hoc commands and create playbooks.

Then Zamir Sun brought a brief introduction to FirewallD. He introduced the advantage of FirewallD, the GUI and command line interface of FirewallD, and the rich language to define complex rules. He also called for help on localization of FirewallD wiki pages and software applications.

Then it was a tea break. Unfortunately there was no drinkable tea since (we thought) there was no hot spoiled water at the venue. But the registration desks were moved to the side and the large banner stood out, which became a very good background to take photos. The booth was also quite popular, partially due to the lovely chameleon dolls brought by SUSE. I also met Su Zhe, the author of venerable SCIM, by the introduction of Emily at the booth. Su Zhe shared some information about Google’s input method project, and told that they are planning to release the input method framework open source.

After the break I went to the main hall to listen to Peng Wu’s “Wayland intro with i18n hacks”. I came in a bit late and only caught the part of two patches for wayland and a demo to run wayland for debugging. Su Zhe raised questions difficult to answer about Wayland and Mir.

After that I went back to Room 8 for Ankur Sinha’s hackfest about “ROS on Fedora”. Ankur introduced ROS and Fedora packaging. The talk was finished early but there was not much time for hacking. Ankur planned hacking on the next day. So we had more discussions, including Fedora Join SIG.

Then all the sessions for Room 8 on Saturday ended. We volunteers, speakers, and some attendees took a group photo, and then went back to the main hall. 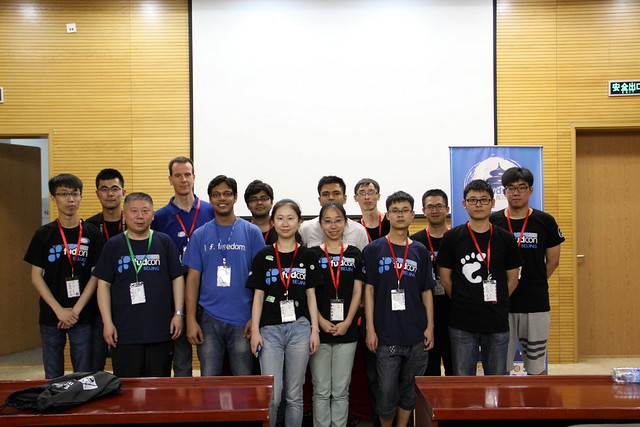 In the main hall we had three lightning talks, and they were Deepin Desktop Environment (DDE) from Xia Bin, Chandao FIXME from Wang chunsheng, and Open Build Service (OBS) from Lance Wang. Then we reached the closing part of first day. A wonderful video of short interviews was created by the volunteers and presented. We also had volunteers take a group photo. 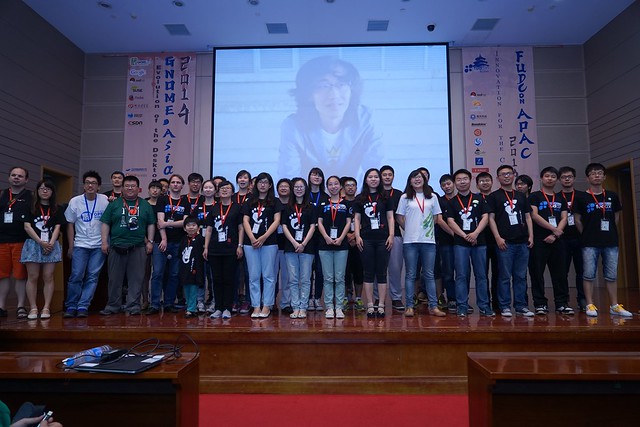 I originally intended to join the sports game after the one day’s sessions, but at that time I was with tiansworld, tommy, and Wang Ye. I needed to help tiansworld to check in at the hotel, but we decided to have dinner first. We searched around the street outside East Gate of Beihang, and settled at Hannashan eating Korean toast. The food was good and not so expensive with groupon. But it would be not so good without conversation! We talked a lot, and after the dinner, Wang Ye left but liangsuilong joined the conversation at McDonald’s. We talked about all kinds of stuff, Fedora related or not. The conversation lasted to over 11:00 PM until I got a message from tonghui, asking whether I was back. We agreed it was a bit late, and it was time to say goodbye and go for rest.

When tiansworld and I were back at the hotel, I helped with the check-in at the front desk. Most of the staff there are not proficient with English, and zsun had reminded me that we needed to speak of 亚洲峰会 (Chinese for Asia Summit) to let them know which group we belonged to. After it was done, we went upstairs to each one’s room. Finally I had time to revise my slides for Sunday. Check the git log if you want to know the detailed changes. While I was preparing the slides, tonghui was checking the photos taken in the day. There are many good photos to tell the truth! It was quite late in the night after I finished my slides, so I went sleep quickly.