Note: For the Chinese version of this report, please refer to this page.

On last Saturday (Sep 21), the Software Freedom Day Activity at Tsinghua University was held. It was hosted by Tsinghua University Network Administrators (TUNA) with the assistance of Beijing GNOME User Group (BJGUG). There were more than 60 attendees. The onsite registration began at about 2 pm, and it was done on a laptop computer running LibreOffice Calc. The spreadsheet would be used by the lucky draw in the end. We prepared CDs, stickers, and posters, which were readily available for every registrants.

The formal event started at about 2:30 pm with the welcome speech by me (alick). I introduced what software freedom day (SFD) is and what free software is. I also introduced the event host and sponsors. This event was sponsored by Mozilla, COPU, GitCafe, CodeWeavers, Linux Deepin, and Fedora community. They provided many kinds of swag as gifts. Besides Mozilla also covered the cost of SFD posters and so on. I also introduced the NITE-LPI certificate program supported by COPU. 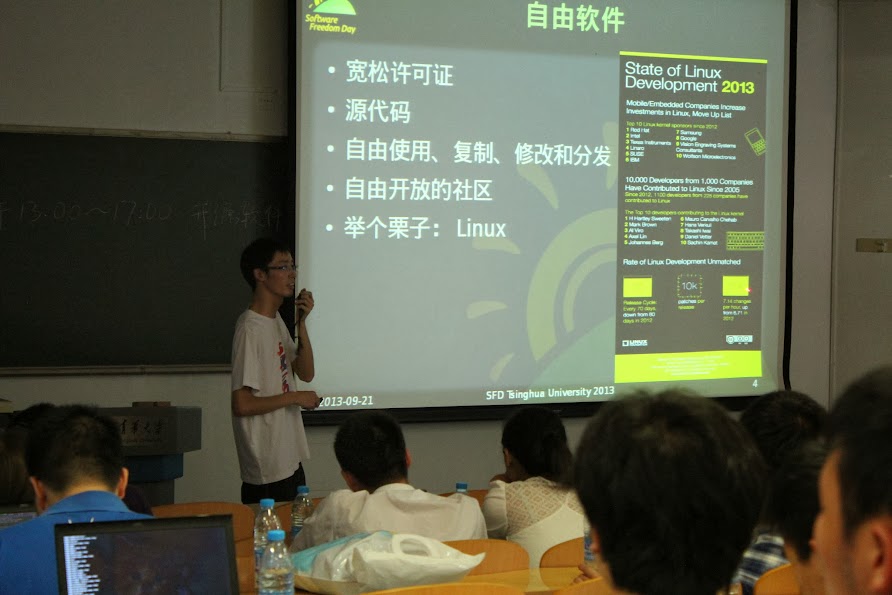 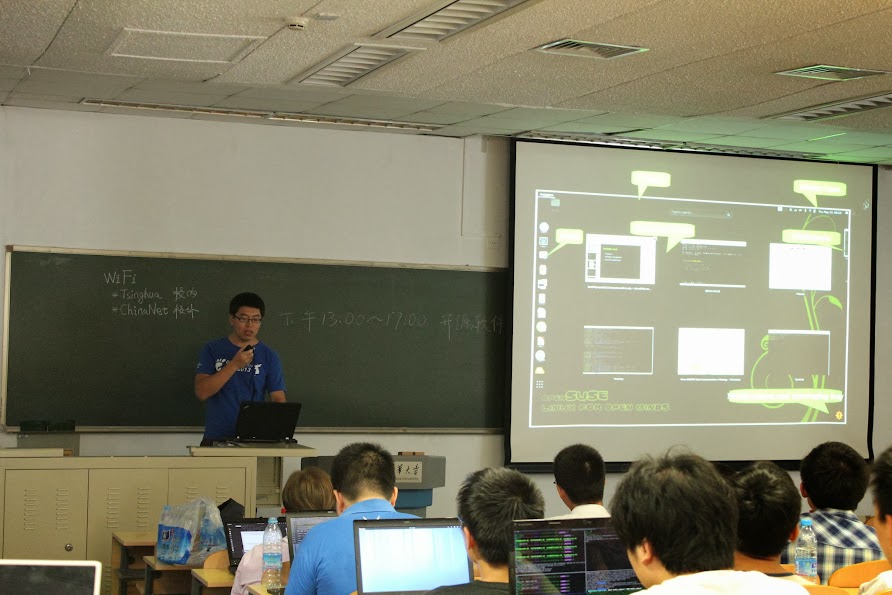 Next was the talk “Firefox & Firefox OS” by Yuan Xulei, who is an engineer from Mozilla. He introduced the features of Firefox, and explained in details how to use addon to customize Firefox and improve the web browsing experience. Later on he talked about Firefox OS, a new open source mobile operating system by Mozilla based on Linux and Gecko technologies. 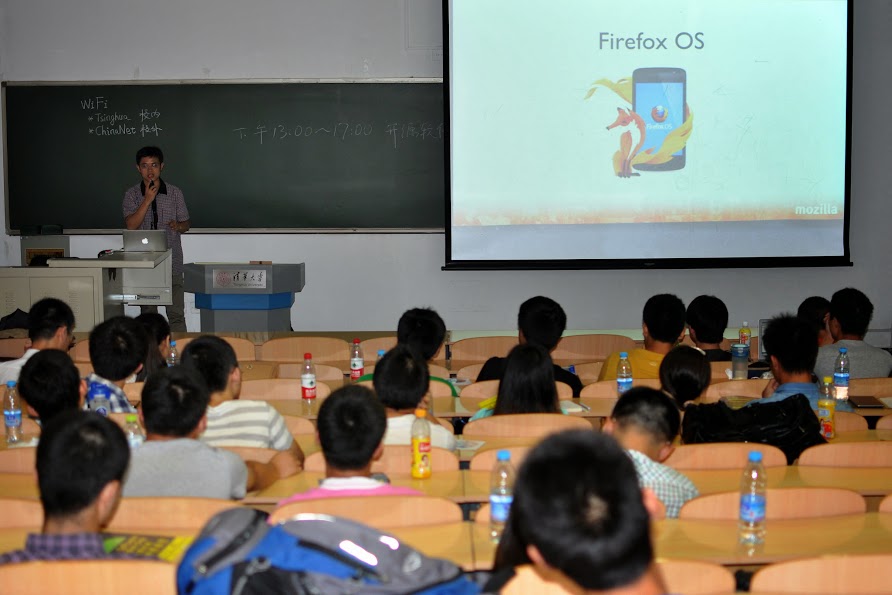 After a short break, Zhou Jianfeng, a teacher from Center for Astrophysics, Tsinghua University, gave the speech titled “Airelinux”. He first introduced Astrophysical Integrated Research Environment (AIRE), and then talked about the goal and plan of Airelinux project. Airelinux is a new Linux distribution targeted to high performance computing in astrophysics. Please join it if you are an enthusiastic astronomer, or active in the community of free software (esp. Debian), or an artist who can help with the artwork design! 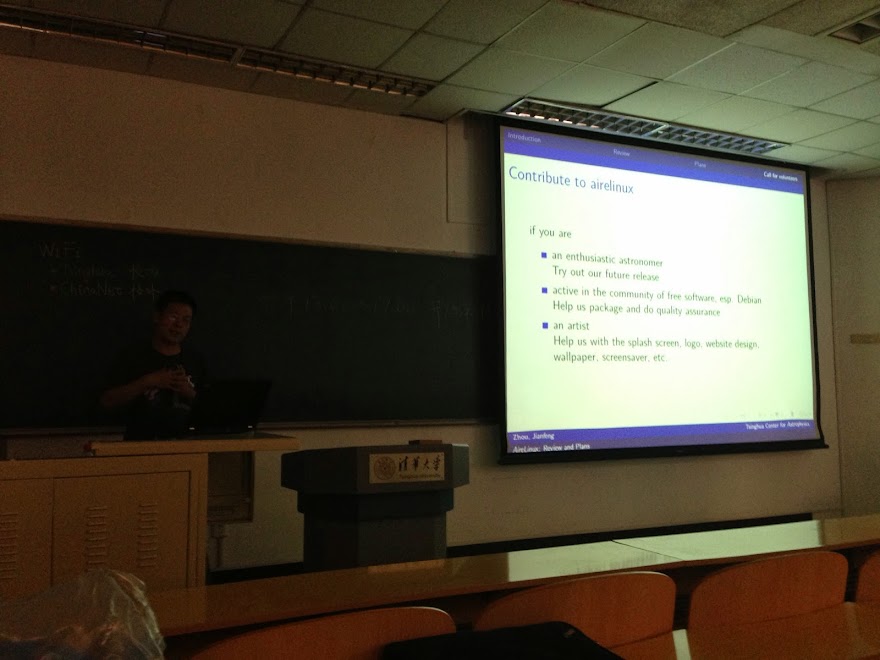 There was five minutes QA for each talk. Gifts such as Firefox toys, notebooks, cups, and mouse pads were distributed.

After the speeches was the parallel demo, Hackfest and Installfest session. Small groups were formed and there were face to face talks. There were two demonstrations. One is brought by Fedora community, where Gerard, a Fedora ambassador, talked with people and encouraged them to join Fedora project. Three Fedora T-shirts were distributed. Another demo was for LPI certificate program, where Wang Yun, the country manager of LPI, explained it to interested people. The hackfest was an software defined radio experiment conducted by Wang Kang (scateu), where data was transmitted between the audio interface, and gMFSK was used to modulate/demodulate on the PC. It was quite attractive to the audience.

At about five o’clock, we had the lucky draw. It was a cute web interface, implemented in Python by Justin Wong (bigeagle). In the lucky draw 3 T-shirts and 5 CrossOver license codes were distributed. At last we had group photos. 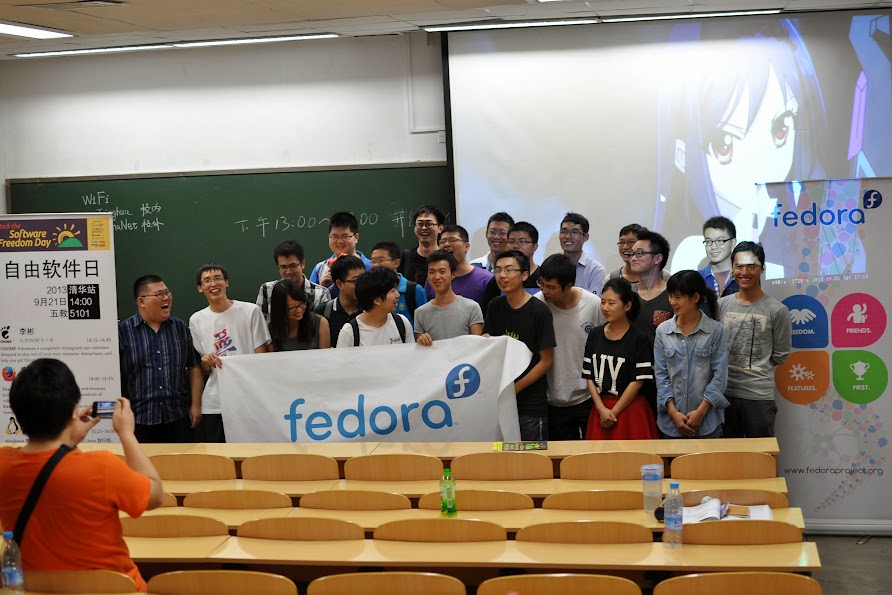 The links to the slides and videos of speeches are available on the SFD Wiki page. The photos can be found at G+ pages. And as a final note, we encourage every attendees to leave your feedback when you got the email notice for the post event survey!